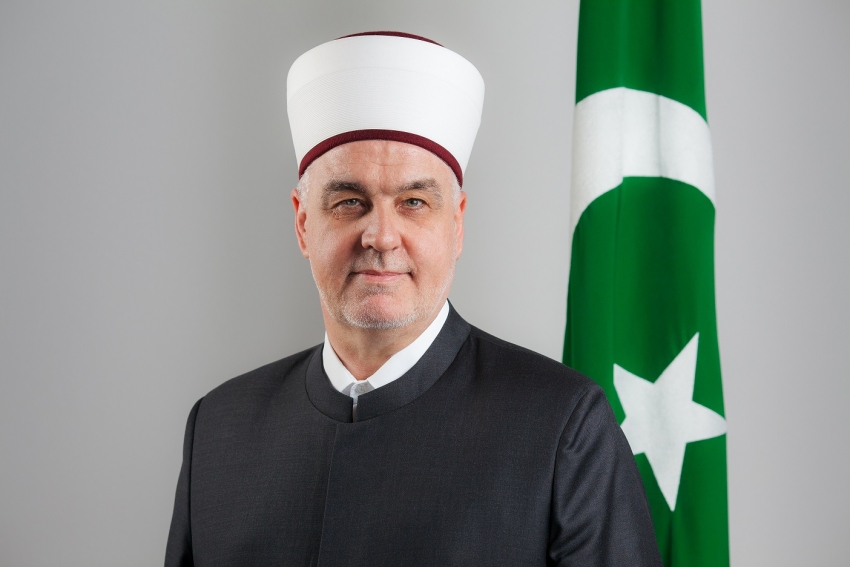 Dr Husein Kavazović is the current Raisu-l-Ulama (Grand Mufti) of the Islamic Community in Bosnia and Herzegovina. He was born to Hasan and Saima on 3 July 1964 in Jelovče Selo near Gradačac.

He completed his primary education in his home village, and then graduated from the Gazi Husrev-Bey's Madrasah in Sarajevo in 1983. He studied at the Faculty of Sharia at Al-Azhar University from 1985 to 1990. He earned his Master's and PhD degrees in Sharia law at the Faculty of Islamic Sciences in Sarajevo.

He served as an imam, khatib and muallim in mosques in Srebrenik and Gradačac. From 1992 to 2012, he was the Mufti of Tuzla, and he became a member of the Council of the Islamic Community of the Republic of Bosnia and Herzegovina before the aggression against B&H started.

Soon after he was appointed the Mufti of Tuzla, upon returning from Zagreb, he and nine other members of the delegation of Tuzla County were captured in Konjic and sent to a concentration camp led by HVO (Croatian Defense Council). After seven months, he was free again and he returned to Tuzla.

As the Mufti of Tuzla, he made crucial contributions to the reconstruction and activities of the Mufti Unit of Tuzla and Behram-bey's Madrasah, introducing Islamic religious education into curricula of primary and secondary schools, and renewal of the Hikmet Periodical. During this time, he was also the president of the School Board of the Berham-bey's Madrasah in Tuzla for several consecutive terms. He made significant contributions to the building of Behram-bey's Library in Tuzla.

He is one of the founders of the Center for Rehabilitation of Addicts to Psychoactive Substances in Smoluća near Lukavac, which is the first center of its kind established by the Islamic Community. Together with his associates, he worked to establish and develop the Agency for Halal Quality Certification of the Islamic Community in Bosnia and Herzegovina. He actively participated in the reconstruction and building of dozens of mosques in Bosansko Podrinje and Bosanska Posavina. At the same time, he actively helped to provide care and homes for refugees in East Bosnia during the aggression, and then rebuild the infrastructure of the Islamic Community in Bosnia and Herzegovina and help Muslims return to the villages and cities they were exiled from. He was also a member and President of the Advisory group for defining the contents of the project documentation for the Potočari –Srebrenica Memorial Center.

His published books include:

Some of his scientific and research papers published in scientific journals are:

He is married to his wife Fatima and has three daughters: Saima, Kadira and Emina, and grandson Muhammed.