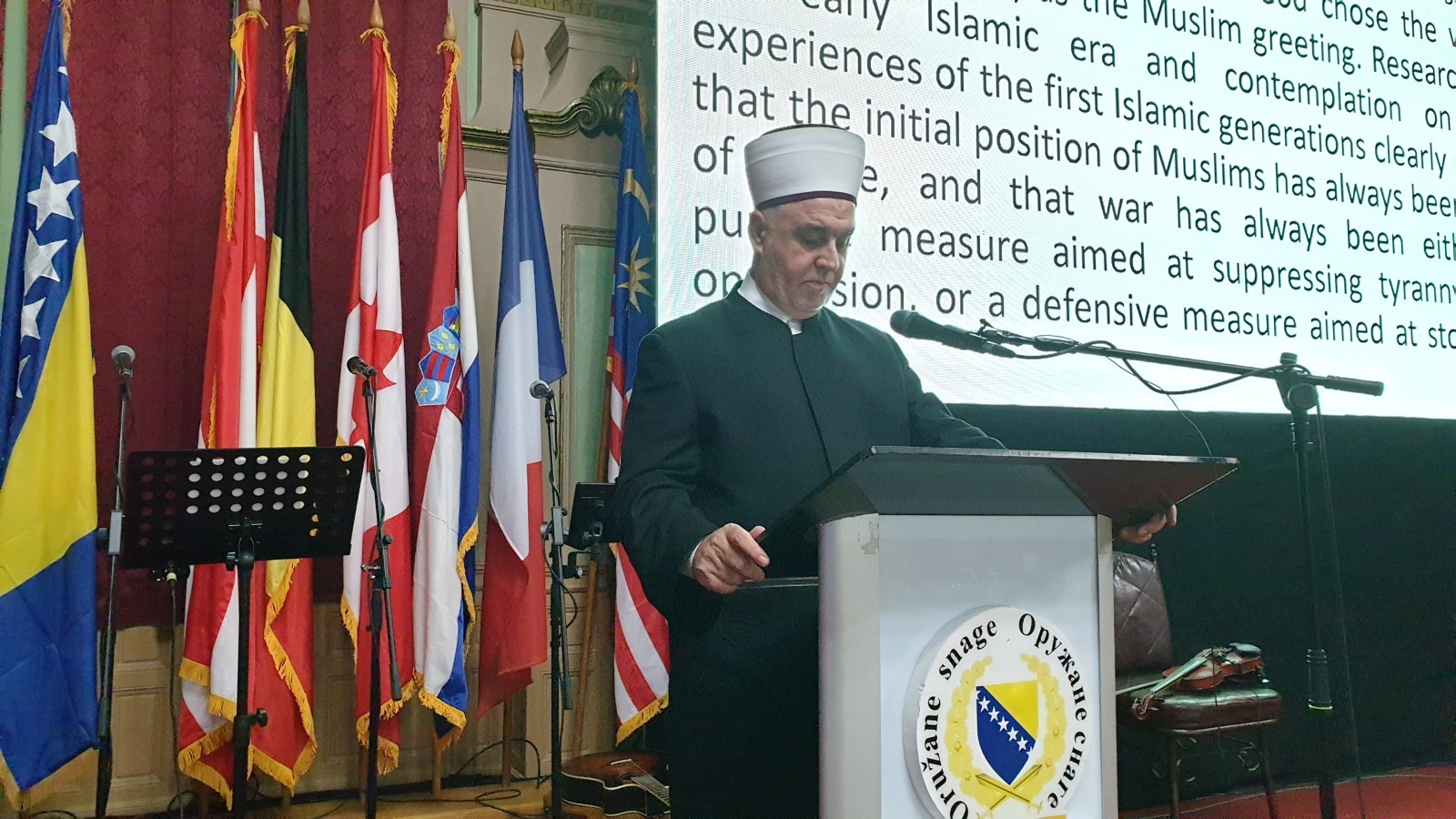 It is my pleasure to be here with you on such a momentous occasion. I would like to congratulate the Military Mufti, the Military Muftiship, the Ministry of Defense and the Presidency of Bosnia and Herzegovina as the commander-in-chief, on this great anniversary.

The history of presence of imams in armed forces has a long tradition in this region and among the Bosniak people. Imams were with soldiers in the most difficult times in the history of our country and nation. The world recognized the need to take care of the spiritual needs and guidance of soldiers a long time ago, and I am pleased that, in partnership with the state, we have revived this institution in the Armed Forces of Bosnia and Herzegovina.

Today we are here to honor the contributions the Military Muftiship and our imams have made to the development of the Armed Forces in the past twenty years. Many people doubted the idea of a common army. It was hard to believe that people who were on opposing sides of a conflict would be able to work together. However, the opposite turned out to be true. Those who survived the horrors of war proved to be the best builders of peace. Those who have experienced war, know best how to cherish peace.

The primary mission of the Armed Forces of Bosnia and Herzegovina is to maintain peace in our country and homeland, and to support peace missions throughout the world. At the same time, building and establishing peace is one of the leading ideals of revealed religions. It was also the mission of the last Messenger of God, Muhammad, s.a.w.s.

Qur'an promotes peace as a fundamental Islamic value. In fact, the terms „Islam“ and „peace“ have the same root, in the Arabic word salam. God chose the word „peace“ („salam“) as the Muslim greeting. Research on the early Islamic era and contemplation on the experiences of the first Islamic generations clearly show that the initial position of Muslims has always been one of peace, and that war has always been either a punitive measure aimed at suppressing tyranny and oppression, or a defensive measure aimed at stopping aggression.

All religions aim for peace and helping people prosper in peace. But they do not leave their members to themselves when that peace is compromised.

They are there to educate people to build peace, but also to help them uphold ethical and moral norms in war, in order to at least diminish the effects of the evil of war.

In its two decades of activities, the imam service of the Armed Forces of Bosnia and Herzegovina has performed numerous tasks aimed at preserving the spiritual integrity of Muslims and protecting human values among members of our Armed Forces. As members of the Islamic Community, and as citizens of Bosnia and Herzegovina, we are proud of your accomplishments and the role that you play in preserving our country and protecting its peoples.

Ideologies advocating segregation and divisions are still present and strong in Bosnia and Herzegovina. The war here was caused by ideas of areas exclusive to only one nation. That, of course, could not have been achieved without mass crimes, so-called „ethnic cleansing“ and, ultimately, genocide. We wish to believe that such evil is left in the past and that the Armed Forces of Bosnia and Herzegovina are a guarantee that it can never happen again. Not only through their military capacities, but also through the value system they should be based upon, the Armed forces bring faith to all people of this country that the evil that happened in the nineties can never happen again.

Finally, I am happy to see that, despite all the challenges, the Armed Forces of Bosnia and Herzegovina are a successful example of renewing trust and working together towards the integration of the country. Imams and Catholic and Orthodox priests who work together in the Armed Forces are a bright example of interreligious cooperation we are sometimes unaware of. I congratulate you all for it. I believe that in the future, imams and their priest colleagues will continue to help build the Armed Forces of Bosnia and Herzegovina and take care of the spiritual needs of our army. You will always have support in the Islamic Community.

Members of the Armed Forces, soldiers and officers, Mufti and imams, congratulations for this anniversary. May you continue to work successfully. Thank you for your devotion to service and for enabling the rest of us to sleep peacefully at night.

May Allah the Almighty bless your efforts and contributions to peace and security in the world.